It is a well-established fact that since inception small and medium-sized practices (SMPs) have been playing a critical role in the growth of accountancy profession across the globe and comprise vast majority of the global professional fraternity. 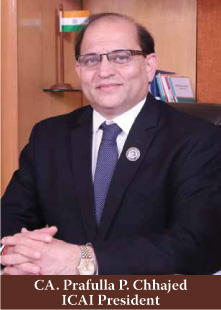 Recently, the Edinburgh Group, a coalition of 16 accountancy bodies from across the world, which champions the interests of SMEs and SMPs, among others, has brought out a special report titled The SMP of the Future in a Changing World, where our members have also contributed. In June 2018, ICAI had requested its members to participate in the research of the Edinburgh Group, so that concerns of the Indian SMPs be duly represented. Considered the engines of growth and innovation, IFAC says, SMEs are crucial to the health, stability, and sustainable economic growth of both developed and developing economies. Despite an absence of consensus in defining SMEs, the Edinburgh Group reported that more than 95 per cent of enterprises globally are SMEs and these contribute significantly to the GDP and employment generation in their respective jurisdictions.

Moreover, the foundations of profession will keep on strengthening corresponding to the development of our knowledge and to the inventing and reinventing of our skills, particularly regarding decisionmaking, planning and execution, and consultancy and guidance. However, having small clientele and restricted resourcefulness, SMPs must preserve their energies on building strong stakeholder relations. They should keep updating their skills as they put their best foot forward to make their deliverables more effective. At the same time, SMPs need to be in constant touch with the reality and manage their finances, which helps them sustain and thrive in the market. SMPs that have many partners and staff, will have to work on their image-building too, so as to strengthen their standing in the market and create an identity of their own.

Considered crucial for sustainable growth worldwide, the professionally-competent SMPs have been serving the industry in India, particularly to the SMEs of the nation, with their services ranging from book-keeping, auditing, assurance, income tax, GST and other taxation, regulatory compliances, credit/risk management and fiscal management. Being the bedrock of SMEs, today SMPs also offer services in XBRL, e-commerce, m-commerce, e-governance, cloud-computing and information system audit.

In view of the vibrant global scenario, ICAI has been providing comprehensive guidance, skillbuilding training and effective IT-enabled services to the SMPs helping in their consolidation and empowerment. Of late, ICAI has provided relevant auditing and accounting software, antivirus software, professional indemnity and health/medical insurance, loan schemes, etc., to the SMPs. Organising such interactive programmes, etc., helps ICAI keep in touch with the SMPs, and the SMPs get focused using such networking platforms, which eventually helps them in understanding the needs of their times, particularly regarding professional compliance and global businesses including the regulatory environment therein. This also enables the ICAI to suitably represent their concerns to the competent authorities in the Government, as and when the situations require. Let us resolve to consolidate our SMPs that in turn strengthen our national economy.

I am happy to inform that ICAI has been felicitated in recognition of its contribution and support in the development of GST ecosystem by the GSTN on its foundation day, i.e. 5th April 2019, by the Chief Guest and former GSTN Chairman Shri Navin Kumar in presence of Revenue Secretary and present GSTN Chairman Shri Ajay Bhushan Pandey and Chief Economic Advisor Dr. Krishnamurthy Subramanian. I along with ICAI Vice-President CA. Atul Gupta and ICAI’s GST and Indirect Taxes Committee Chairman CA. Sushil Goyal were present on the occasion to accept the Certificate of recognition. This honour has come to us in response to our various initiatives and dedication to the cause of GST. ICAI has been and will remain supportive to both Central and State Government(s) in their endeavours pertaining to the ambit of our professional expertise and excellence.

Testing of Software for Taxpayers: GST Council has mandated the Goods and Services Tax Network (GSTN) to provide free software to taxpayers having a turnover of less than 1.5 crore, with features of invoicing, accounting, trial balance and return filing. Responding to their request, ICAI has helped the GSTN in testing the software for the aforesaid application.

GST Portal: Based on GSTN’s request for suggestions for improving the GST portal, ICAI submitted 38 suggestions to improve various forms/ interfaces available on the Portal including filing return, making payment and login.

Taxation in Infrastructure: GST Council had proposed to impose tax at the rate of 1% and 5% on affordable housing properties and for the residential properties outside affordable segment respectively, at its 33rd meeting. Now, favourably responding to ICAI’s eight suggestions in that regard, the GST Council at its 34th meeting held on 19th March 2019 has decided that these new rates would be mandatory only for new projects that would start from 1st April 2019 and taxpayers have been given freedom to opt for the new scheme in the running project, if they so desired.

Updated e-Learning Modules on Customs and FTP: ICAI has come up with an updated series of e-Learning on Customs and foreign trade policy (FTP) comprising recorded video sessions, which cover almost all relevant topics in that regard.

You would recall, ICAI has entered into an MoU with the Institute of Chartered Accountants of Nepal (ICAN) in the august presence of our Hon’ble Prime Minister in the year 2017. Recently, we provided technical assistance to the ICAN in further strengthening of their examination systems. Representatives from ICAN who were with us to observe and learn the intricacies involved in the system of examinations, keenly appreciated our efforts in serving their cause. Quite willingly, ICAI has supported the cause of setting up of accountancy institutions in various developing countries, offering its technical and infrastructural support in the past. Here I would like to express my sense of pride in such endeavours of our Institute, which among others led to the establishment of Nepal’s accountancy institution.

Meetings of SAFA Board and Committees: I along with ICAI Vice-President CA. Atul Gupta attended the SAFA Board meeting recently on 6th April 2019, where the IFAC President Dr. In-Ki Joo briefed the Board on key focus areas of the IFAC. Meetings of SAFA Committees had also been organised, where my Central Council colleague CA. Charanjot S. Nanda chaired the meeting of SAFA Committee on Education, Training and CPD. He had also presented a paper at SAFA Conference, which was held on 4th April 2019.

IIRC Meeting: I attended the meeting of the International Integrated Reporting Council (IIRC) as the ICAI representative on 10th-11th April 2019 where discussions took place on developments on corporate reporting and bringing clarity in its landscape, theory of change in view of capitalism and governance models, multi-capitalism and its impact on corporate reporting, among others.
International Conference at Dubai Chapter: I and ICAI Vice-President CA. Atul Gupta recently addressed at the 37th Dubai Annual Conference organised by our Dubai Chapter on 19th-20th April 2019; this was attended by around 1000 members based in the Middle-East countries, along with a galaxy of ICAI past Presidents. ICAI had also exhibited at the Conference venue to promote the 21st WCOA that ICAI is organising on 18th-21st November 2022 in Mumbai. We met UAE Tolerance Minister Sheikh Nahyan bin Mubarak Al Nahyan and Education Minister Mr. Hussain bin Ibrahim Al Hammadi, and discussed, inter alia, long-term visa for CAs and equivalence of CA degree with postgraduation. We also had a meeting with the Indian Ambassador to UAE Shri Navdeep Singh Suri during our visit.

ICAI makes it a point to regularly submit its pre and post-budget memorandum to the Ministry of Finance or respective State Ministry, in order to improve their taxcollection, reduce/ minimise litigations, rationalise the provisions of taxation laws and remove administrative and procedural difficulties. In this regard, I request all my professional colleagues to submit their suggestions to the Institute with regard to the laws relating to direct (including international) and indirect taxes, which will help us in identifying the relevant issues for inclusion in our Pre-Budget Memorandum-2019. You may provide suggestions on how to widen tax base, increase tax revenue, check tax avoidance and reduce litigations. You may give your inputs at https://appforms.icai.org/preBudgetSuggestion/index.html.

In response to the request of the MAT-Ind AS Committee constituted by the CBDT, suggestions/ inputs on the proposed draft Form No. 3CD applicable for the Assessment Year 2019-20 were submitted.

In the larger interest of our economy, ICAI has always ensured that Indian Accounting Standards (Ind AS) Framework remains converged with the globallyaccepted International Financial Reporting Standards (IFRSs) all the time, by constantly monitoring the global financial reporting scenario. It plays a critical role in our standard-setting framework by formulating new Ind ASs and amending the existing ones, as required, in line with the IFRSs as issued by the IFRS Foundation. I am happy to inform that Ind AS 116, Leases which is applicable for accounting periods beginning on or after 1st April 2019, has been recently notified by the Ministry of Corporate Affairs. Replacing the existing standard Ind AS 17, Leases, the new Standard will usher in pathbreaking reform in accounting for leases and improve the quality of financial information. This will bring substantial visibility of lease commitments of companies, financing and operating model and, above all, will better reflect the economic reality.

While complexity in businesses and financial reporting, and use of decision-skills have remarkably increased in the accountancy profession, scepticism in profession has not caught the attention of professional accountants globally in that proportion. It is generally accepted that quality audit never gets over without the application of professional scepticism. Then it is also true that auditors generally have retained their urge to doubt, prod and question the numbers that are at the surface, in order to ensure that the story beneath is the same as well. Rabindranath Tagore says: Facts are many, but the truth is one. Such an affirmation can only be managed through careful, plausible and real questioning in a well-timed and drafted effort corresponding to the nature, scope and deadline of the assignment.

Scepticism which is intrinsic and usually the second nature of auditors across the globe should be in the repertoire of all professional accountants. This needs to be enhanced proportionately especially in view of rising complexity in business procedures and regulatory compliances, and advances in communication and technology and other relevant sectors, since professional scepticism helps the professional accountants generally in making quality decisions and particularly in identification and assessment of risk in businesses. Let us continue to exercise scepticism as we carry out our professional responsibilities.

Before I conclude, I would like to extend my heartfelt wishes on the birth anniversary of our philosopher and teacher Gautam Buddha (18th May) who taught the world to follow the middle path away from the extremes of our life. We will also celebrate the birth anniversary of Rabindranath Tagore (9th May) who taught us to welcome our generation next and accept them with their ideas and vision. Let us have an open mind to learn from the wisdom of the great men.

I also take this opportunity to congratulate the people of Gujarat and Maharashtra on their State’s formation day which falls on 1st May.